What Are DDoS Attacks? 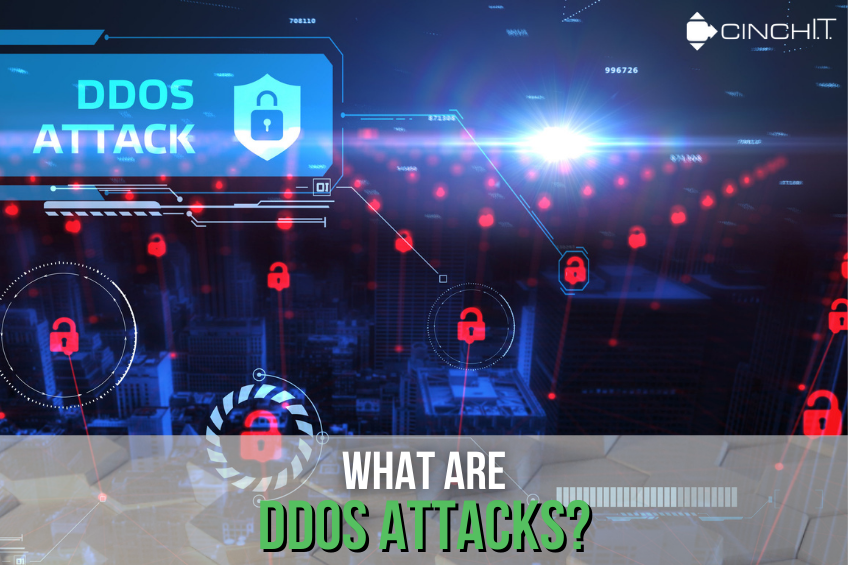 What Are DDoS Attacks?

The risk of DDoS attacks is nothing new: it has been a known quantity in the I.T. industry for a long time. A decade ago, businesses didn’t take DDoS attacks as seriously. Then, DDoS attacks were assumed to be mainly perpetrated by amateur hackers showing off their new tricks for fun. These attacks were mostly minor, so it was relatively easy for business I.T. support to mitigate them.

Unfortunately, that time has long passed. Now, DDoS attacks can be so complex, sophisticated, and disruptive that you can no longer dismiss them. The threat DDoS attacks pose to small and medium-sized businesses is numerous. And the most worrying thing about DDoS attacks is that it is now a big business for the perpetrators.

What Is a DDoS Attack?

DDoS means Distributed Denial of Service, and it is a subclass of Denial of Service (DoS). A distributed denial of service attack is a malicious campaign to disrupt the normal network of a targeted resource by flooding the resource or its surrounding infrastructure with fake internet traffic.

DDoS attacks are also known as Distributed Network Attacks. This attack mainly focuses on taking advantage of the specific capacity limits attached to every network resource. A DDoS attacker will send a wave of multiple requests to the targeted web resources – such as the underlying infrastructure running a business website – aiming to exceed the request capacity the resource can handle, thus preventing authentic users from accessing the website.

How a DDoS Attack Works

Every network resource such as a server, service, or website has a specific limit to the number of requests they can handle simultaneously. Also, the channel that connects the network resources in question to the internet will have a finite bandwidth of network requests it can handle simultaneously. So, whenever the number of requests exceeds the finite capacity limits of any components of the infrastructure, the level of overall service delivered by the network will suffer in one of the following areas:

– Time taken to respond to requests will be much longer than usual.

– Some or all user’s requests will be completely ignored.

Unlike most cyberattacks, DDoS attacks don’t attempt to breach your security perimeter. Instead, a DDoS attack’s ultimate aim is to make your website and servers inaccessible to legitimate users.

DDoS Attacks Are on The Increase

Over the last few years, we have all witnessed a series of DDoS attacks that have grounded businesses for a significant amount of time. Most worrying is that these attacks are becoming frequent at an astonishingly fast rate.

Almost 3 million DDoS attacks happened in the first quarter of 2021 alone, a 31% increase over the same period in 2020.

And remember: for every reported attack, several more thousands are unnamed and undocumented that happen daily. In other words, these are mostly the successful ones to which many small to medium-scale enterprises fall victim.

Do you have a business continuity plan if
disaster strikes? Cinch I.T. can help!

A botnet is a collection of hijacked connected devices used for cyberattacks. These devices typically include mobile phones, IoT devices, and even unsecured cloud services. DDoS attackers use malware and other compromised techniques to turn a device into a zombie in the botnet.

To send an extremely large number of requests to a network resource, the cyber attacker will typically establish a “zombie network” of compromised devices. By harnessing the power of many machines in a botnet, the attacker can wage large-scale attacks on their targets. Using a botnet creates an overwhelming number of obscure requests, making it very difficult for business computer support teams to detect that a DDoS is ongoing before it is too late.

How to Identify DDoS Attacks

DDoS attacks often look mundane, so it’s difficult to know what to expect. Furthermore, a cybersecurity audit should unravel any trace of a DDoS attack. However, for now, a detailed network analysis is necessary to determine an ongoing attack.

Below are network and service behaviors that may suggest a DDoS attack. The occurrence of any of them should worry you:

– Secondly: A surge of traffic appears to come from users with similar characteristics, behaviors, devices, geographical location, or browser.

– Thirdly: you receive a server time-out when attempting to test it with a pinging service.

– Fourthly: A server responds with a 503 HTTP error code. Meaning it is either offline for maintenance or overloaded.

– Lastly:f network logs indicate an unusually and unexpectedly large spike in traffic to a particular endpoint or browser.

This behavior can also help I.T. support teams identify the type of DDoS attack in question. For instance, a 503 error likely indicates a protocol-based or network-centric DDoS attack.

DDoS attacks that have disrupted the activities of big businesses are well documented, like the Mirai botnet, which affected tech giants such as Amazon, Netflix, Reddit, Spotify, and Twitter.

However, many more DDoS attacks on hundreds of small businesses are equally successful yet more disrupting but gain lesser coverage.

In the Global State of Cybersecurity in Small and Medium-Sized Businesses, two in three businesses had experienced a cyberattack in the last year alone. These cyberattacks have grave consequences for businesses, including:

Data loss often results in a web of business problems, including reputation damage, legal fines, and financial loss. For many small to medium-sized businesses, a cyberattack may be the end. Nearly 60% of small businesses couldn’t recover after a cyberattack.

Preventing DDoS Attacks and Other Cyberattacks

Above all, the potency of cyberattacks is the result of poor preparation.

Businesses owners should start seeing cybersecurity as a big part of the business and preventing them a centerpiece to any disaster recovery and a business continuity plan in place.

Cybersecurity is not a thing the regular owner can handle. A watertight cybersecurity layer needs expertise knowledge to set up and configure. Whether that means inviting the services of third-party cybersecurity experts or building full in-house business I.T. support teams, that’s left for the business owner to decide.

In conclusion, investing in robust cybersecurity gives businesses a better chance at survival.

Since 2004, Cinch I.T. has provided customer-focused I.T. services for businesses of all sizes. Whether you need a business continuity plan or a reliable cloud computing office, our computer support offers the fastest and friendliest service in the industry. Cinch is one of the nation’s fastest-growing I.T. support franchises with 10 locations and counting. To learn more about our computer support service, visit cinchit.com. For more information about I.T. franchise opportunities, visit cinchfranchise.com.